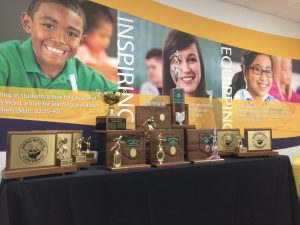 The Dayton Christian Warriors have much to be thankful for and we are praising our Lord for His daily blessings, provision, mercy and grace during the 2018-2019 school year! Congratulations to all the student-athletes, coaches, and athletic staff on a great year!

Softball team clinches share of their first MBC title since 2013.

Tennis team finishes season with 19-2 overall record and was ranked #9 in the Miami Valley!

Seven Student-Athletes Sign to compete at the Next Level!

$5,000 of athletic scholarships given by the DC Athletic Booster Club!

ABOUT DAYTON CHRISTIAN SCHOOL: Founded in 1963, Dayton Christian School (DCS) is an interdenominational Christian school located in Miamisburg, Ohio that serves more than 800 students in grades pre-K to 12th grade, including students in Dayton Christian Preschool & Dayton Christian Homeschool. For over 53 years, DCS has a rich heritage of educating for eternity, where we provide a Biblically-integrated, academically rigorous Christian education. We are proud to be “Instilling, Inspiring, and Equipping” the next generation of leaders.