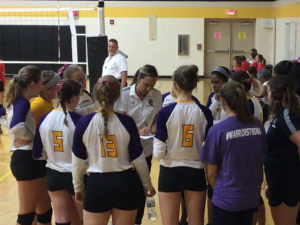 Construction is a popular topic these days among the families, faculty and staff at Dayton Christian High School, but to those familiar with its 55-year history, their collective enthusiasm is well warranted.  For years, the school’s various sports teams have had to play their home games at rented facilities throughout the area. However, all of that is about to change since DC recently broke ground on the long-awaited 31,000 square-foot Warrior Center which will serve as the hub of activity for the school’s indoor athletic programs.

As anticipation for the new facility has grown, similar excitement has begun to follow the school’s volleyball program which embarked on its own construction efforts when it named Angi Dabbelt as its new head varsity volleyball coach in January of 2018.

Dabbelt’s hire followed her two-year tenure as the head coach of Dayton Christian’s junior high team which she led to a second place finish in the Metro Buckeye Conference in 2016, and then an undefeated championship season in 2017.

Though she inherited a tradition-rich varsity program which owned six shared or outright conference titles, as well as two state final four appearances, it hadn’t enjoyed more than five wins in a single season since earning its last conference crown in 2014.

Coach Dabbelt, who first honed her skills as a player at Stebbins High School and then on the NCAA Division I level at Wright State University, arrived with a competitive fire that sought to not only rebuild the varsity squad, but the culture of the program as a whole.

“One of the first things I wanted to establish is that the players here are part of a family,” says Coach Dabbelt.  “I want all the girls to feel like it’s a safe place where they can learn the sport and grow together, from the youngest to the oldest.  We have fun, but we’re also competitive and we work hard to build that unity from within.”

Players are expected to keep weekly journals to share about each of their personal challenges and goals, and teammates are assigned to one another as prayer partners who meet routinely throughout the season.  Players are also given the responsibility to lead weekly team devotionals.

“The foundation Coach Dabbelt is laying is creating an environment that will allow these girls to grow and mature for years to come,” says Ben Shroyer, Dayton Christian Athletic Director.  “She’s brought in much needed enthusiasm, passion and dedication and the girls have really rallied behind her leadership.”

That leadership has been vital as she’s been charged with guiding a varsity team that doesn’t have a single senior on its roster. Though the learning curve has sometimes been steep for a lineup that routinely starts as many as four freshmen, this group’s potential is already being felt as underclassmen are among the conference’s top ten leaders in kills, serves, assists, digs and blocks.

“I think this group has the opportunity to do some really great things,” says Coach Dabbelt. “There’s no telling how far they’ll be able to go if they continue to work hard and prepare during the off-season.”

Much like the Warrior Center, the construction process for Coach Dabbelt is a labor of love as much as it is about building a framework for future success on the court.  It’s almost fitting then that Dayton Christian’s volleyball team will be the first of the school’s athletic programs to use the facility when the season opens in the fall of 2019.

“It just goes right along with what our vision is, that we are a family and that this family will have a home,” says Coach Dabbelt.   “I think it will be super, super cool to be the first team to be in there!”