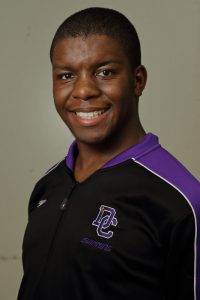 Andrew “Dru” Simmons is the son of Andrew and Terri Simmons, and big brother of Aaron. Andrew is a four-year member of the swim team and serves as team captain. Andrew specializes in butterfly, freestyle and backstroke. He holds the school record in the 50 butterfly and anchored the record breaking 400 free relay. He is a district qualifier in the 200 free and 100 back. He was also a 2-year varsity member of the track and field team. He has received the Metro Buckeye Conference sportsmanship award three times in swimming and twice in track and field. Andrew was also an inaugural member of DC Mathletes.

Andrew will continue his athletic and academic career at Chowan University (NCAA II) in North Carolina where he will swim for the Hawks, specializing in backstroke. He will major in Biomedical Humanities with a goal of becoming a Family Practice Physician. Andrew’s life verse selection is Jeremiah 29:11 “For I know the plans I have for you, declares the Lord, plans to prosper you and not to harm you, plans to give you hope and a future.”

Make plans this Saturday to come out and hopefully see history in the making as Andrew and the rest of the ‘Warriors of the Water’ swim for an elusive conference championship and also hope to re-write the swim record books. The Metro Buckeye Conference Swim Championships will take place Saturday, Feb. 2 at 3:00pm at Trotwood Madison HS.

Join us and be a part of something big! Let’s set a record for the most Purple and Gold Warrior fans at a swim meet, cheering on YOUR ‘Warriors of the Water’ swim team! Go Warriors!