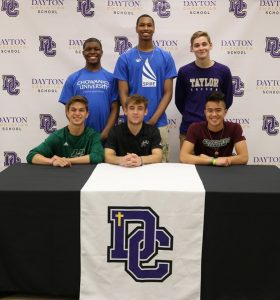 Six Dayton Christian Student-Athletes Sign to Play at the Next Level
Wednesday, May 1, 2019 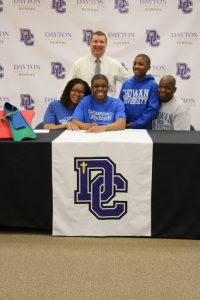 Andrew Simmons, captain of the swim team, will be attending Division II Chowan University where he will pursue biology and humanities. Simmons holds the school record in the 50 butterfly and was also the anchor of the school record 400 freestyle relay team. He received MBC Sportsmanship Award in 2016 and 2018 for swimming, and in 2016 and 2017 for track & field. Simmons was selected to MBC All-Conference first team in the 100 backstroke, 200 medley relay, and the 400 freestyle relay during his senior season. 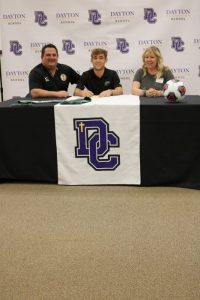 Noah Alexander will attend Huntington University where he will study business and play men’s soccer. Alexander’s awards are numerous as he has reached notoriety beyond the Miami Valley. He was named to the 2018 United Soccer Coaches All-America team and was twice named to the first team All-Great Lakes Region.  He has earned first team All-State honors three times and second team All-State honors twice. Alexander was selected as the Miami Valley Player of the Year & MBC Player of the Year during his high school career. He holds the school record for the number of career assists and is ranked fourth in the state of Ohio for career assists. 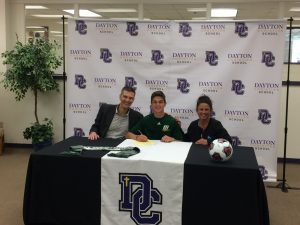 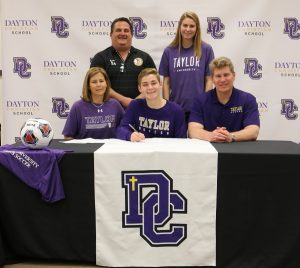 Colin Klein signed to play men’s soccer for Taylor University and will pursue a degree in business. Klein was a three-year varsity letter winner and member of the state runner-up team in 2018. 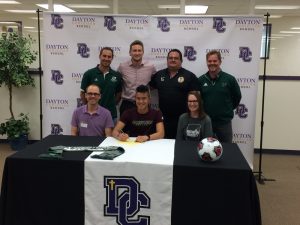 Paul Socha will be joining Alexander and Erlandson at Huntington University where he plans to study history education and play men’s soccer.  Socha is tied for first for the school record of single season shut-outs. He also holds the school record for the number of single season saves and career saves. He is number ten in the state for the number of career shut-outs. Socha was named to first team MBC and All-Area team during his senior campaign. During his junior year, he was named to second team All-Conference and third team All-Area. 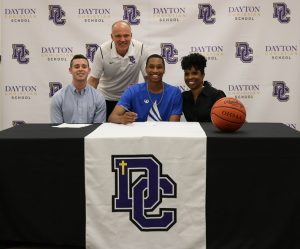 Anton Webb will attend Spire Academy during the next academic year to play boys’ basketball. Located at SPIRE Institute (Geneva, OH), a United States Olympic and Paralympic Training site, SPIRE Academy is an international high school and postgraduate academy focused on developing and preparing student-athletes to be successful in college. Postgraduate athletes have the opportunity to take college courses through Kent State University while they will also train and play basketball. During his career at DC, Webb earned second team MBC All-Conference honors (2015-2016), as well as first team All-Conference honors. Webb was selected to first team All-District (underclassmen) team in 2016-2017. As a senior, Webb was named MBC Player of the Year, first team All-Conference, All-District & All-Region honorable mention honors as well.

Congratulations to these six student-athletes who have signed to play at the next level! Go Warriors!