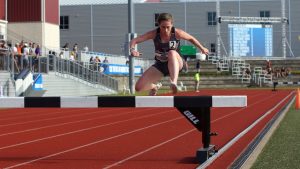 , won a pair of national titles over the weekend at the NCAA Division III Track & Field Championships. Rodenfels, a 2019 Centre College graduate, defended her 2018 crown in the 3000m steeplechase on Saturday morning before winning her first title in the 5,000m run later in the day.

USTFCCCA Meet Recap: “Annie became just the second woman in NCAA DIII history to win the steeplechase and 5000 at the same NCAA DIII outdoor championship meet. Shauneen Garrahan of Amherst was the first back in 2007. Rodenfels kicked things off with a victory in the steeplechase, an event in which she set the NCAA DIII record earlier this season. She won that event title by 18 seconds over Tasha Freed of Johns Hopkins. A few hours later, Rodenfels showed her strength and pulled away late to a commanding victory in the 5000. She won by 12 seconds over Elise Ramirez of SUNY Geneseo.”

What’s next for Rodenfels? She looks to qualify for the upcoming Olympic Trials and become a sponsored professional athlete. Read full article, here.

Congrats to Annie on her accomplishments from Dayton Christian School!