John Wooden, the legendary former head basketball coach at UCLA is quoted as saying, “Tomorrow is yet to come. However, tomorrow is, in large part, determined by what you do today.”

For the Dayton Christian Lady Warriors volleyball team and others within the Dayton Christian athletic community, tomorrow had long been something that, up until now, had felt like little more than a distant dream for a school without a true home court.  All of that is about to change, however, on August 17 when the volleyball team will open the 2019 season by playing the very first athletic contest in the school’s newly constructed gym, known as the Warrior Center.

“We are truly thankful to see how God has enabled everything to come together,” said Ben Shroyer, Dayton Christian athletic director.  “The excitement has definitely grown as this building has taken shape.”

Though the facility took nearly a year to build, most within the Dayton Christian family will tell you it was the culmination of a dream that was years in the making and the result of the hard work, sacrifice, and prayers of many.

These foundational elements haven’t been lost on head volleyball coach, Angi Dabbelt, as she prepares her team for the 2019 season.  Though only in her second year at the helm of a young varsity squad, these same components formed the basis for the days and weeks that followed the team’s early exit from last year’s OHSAA tournament.

“We’ve already seen some significant growth during the off-season as many of the girls made a commitment to strengthen their game, both individually and at the club level,” said Dabbelt. “There will always be room for improvement but you can already see how their skill, consistency and confidence have grown.” 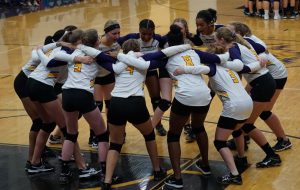 She returns nearly every player from the 2018 team, but the core remains mainly composed of underclassmen who are just a year removed from making the leap from junior high to the varsity level.  Though that last season felt like a baptism by fire at times, it had a unifying effect that drew the team closer together and strengthened their resolve to build for the future.

Dabbelt saw this quality surface when the team was recently offered the opportunity to participate in a preseason tournament that would put them in head-to-head competition against some of the most powerful Division I and II programs in the entire state.

“When I presented it to our team, they were emphatic that they wanted to do it and didn’t back down one bit from the challenge,” said Dabbelt.

That willingness to fight for one another against any opponent is a byproduct of her belief that being a member of the Dayton Christian volleyball program is to be a part of a family, and her team-first philosophy is one that grew out of her experience as a former volleyball player at Wright State. Her approach is being adopted by the program at all levels, and Dabbelt is even looking for new opportunities to introduce younger girls to the game engage and connect with DC volleyball alumni to become involved with the program.

Like last year, the current team will participate in weekly devotionals and spend time together in prayer, and also attend various team outings and volunteer opportunities throughout the community.  As they grow together, Dabbelt remains confident that the increased experience and unity should serve them well as they face the new challenge of moving up from Division IV to Division III.

“I know that when we push and have high expectations of ourselves, it will only make us better, especially as we step into league and tournament play,” said Dabbelt.  “Yes, we will face great players and great teams along the way, but the way we are going to build for the next week, next month, or even next year, is to meet each one of these challenges together today.”