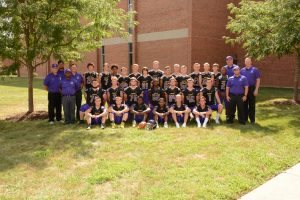 The Division VI and VII football All-Ohio teams were announced today by a statewide media panel. The teams were selected by members of the Ohio Prep Sportswriters Association.

The varsity football team finished the regular season with an 8-2 overall record and received a final ranking of #8 in Region 24. The Warriors advanced to the quarterfinal round of OHSAA Division VI playoffs for just the third time in school history. Two of the memorable highlights of the season, was the 2OT homecoming game thriller vs. Summit Country Day, and the great sportsmanship exhibited during the quarterfinal playoff game in Southeastern (Chillicothe). Special thanks to all who made the season a success: our thirteen seniors, the cheerleaders, our marching band, dedicated parents, coaches, and loyal Warriors Fans!

Congratulations to our football team on an incredible season! Go Warriors!