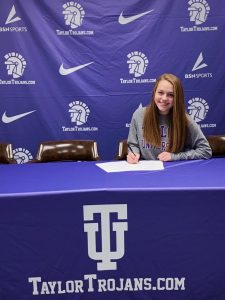 This past Friday, Kayla Ogburn, signed her NLI at Taylor University (IN). The Dayton Christian junior, standout forward, made the decision to continue her academic and athletic career with the Taylor University Trojans Women’s Soccer Program for the 2021 soccer season.

Kayla commented, “It is hard to believe that my journey and dream has become a reality.” Kayla has been a standout on the pitch from the beginning. Her hard work and aggressiveness helped her grow into a fierce competitor. Her work ethic honed her skills and knowledge of the game that not only made her dangerous, but also enabled others. Then an unexpected injury put those dreams in jeopardy.

Kayla had to re-imagine her future, but decided that she was not done and that an injury was not going to define her.  Like in everything Kayla does, she put in the work and achieved a comeback that put her right back in elite status.

Chico Grajeda her trainer commented that “Kayla is a self-driven student athlete on and off the field. She is detailed in her training and is always asking questions to better understand how to improve her performance.” All the hard work paid off and the dream was alive.  Kayla was ready and hit the pitch.  Early in her junior season for the DC Warriors she realized that she was back to her original form.  After talking to family and mentors she was ready to pursue the dream of playing collegiate soccer again.

DC Head Girls Soccer Coach, Jessica Orme, reflects that “Kayla is a tremendous athlete.  However, she does not rely solely on her natural physical ability or skill set to be successful.  Kayla consistently pushes herself physically, mentally and spiritually not only to be the best version of herself, but also to be the best teammate she can be.  Her hard work and desire to serve and love her teammates is a direct reflection of her heart.” 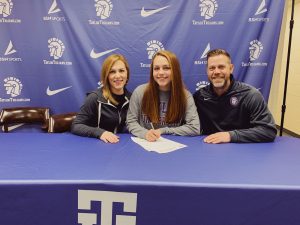 Coach Stan from Taylor University said he first took notice of Kayla when she came to their ID camp a few years back. “Kayla developed into a strong, composed, and determined goal scorer. We believe Kayla will continue to develop into a successful finisher at the collegiate level.  She is the goal scorer that finds a way to create a goal out of nothing.”