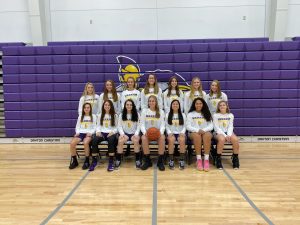 Congratulations to the girls’ varsity basketball team and coaches on a great season! Following is a season recap, which includes a list of the players who received post-season awards and honors.

The girls’ varsity basketball team finished the season with a 12-8 overall record and was 6-6 in the competitive Metro Buckeye Conference. The Lady Warriors posted their best overall season record since 2012 when they finished 16-6 overall. Camryn Collinsworth, Kayla Ogburn, Tiffany McAfee, Bailey Peterson, and Alena Seaquist all finished within the top-16 of the conference standings in total points scored during the 2019-2020 campaign. Collingsworth and Ogburn led the team in defensive rebounds; while Seaquist and Ogburn averaged at least 2.5 assists per game. The Warriors often saw a balanced offensive attack, with five different players being able to lead the team in scoring on any given night.

The team opened the regular season, playing the first ever basketball game in the school’s newly constructed Warrior Center. It was a memorial night, as the Lady Warriors defeated Twin Valley South, in front of a capacity crowd. Playing ten home games in the new Warrior Center throughout the season generated some new fun game-day activities for the players, coaches, and fans: business sponsor nights, teacher/staff appreciation, Athletic Hall of Fame weekend, Girls Youth Basketball Night, the annual Red Game, Senior Night, and a few varsity doubleheaders with the boy’s team. 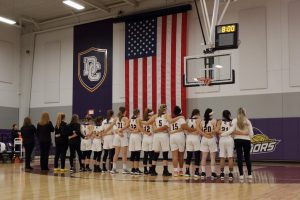 The Lady Warriors season ended with a loss to the eventual District champion, Versailles, in the OHSAA tournament. However, with only three seniors graduating from this year’s roster of fourteen, the Warriors are already looking forward to the ’20-’21 season! The program anticipates being able to field a junior varsity team next year, as an athletic and experienced team of 8th graders will be coming up to join the high school team.

Camryn and Kayla were selected to play in the District 15 Division III/IV Girls Basketball All-Star Games on March 15 at Waynesville High School.