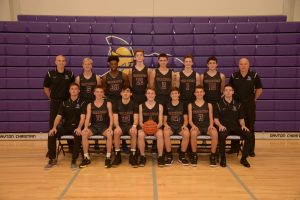 We’d like to congratulate the boys’ varsity basketball team and coaches on a successful season! Following is a short recap of the season, which includes a list of the individual players who received All-Conference and District 15 honors. Warrior Fans, can enjoy a full recap from every game of the season at: daytonchristianwarriors.com.

The boys’ varsity basketball team finished the season with a 15-9 overall record and was 11-3 in the competitive Metro Buckeye Conference. The Warriors roster featured eleven players, four of whom were seniors.

The Warriors were led offensively by Isaiah Edwards & Devin Dreier who both averaged 11.0 points per game, which ranked within the top-15 scoring leaders in the league. Seth Griswold and Brady Woodall, led the MBC in assists per game, averaging 5.0 and 4.9 APG respectively. Dreier & Edwards provided the Warriors with strong defensive rebounding, as they both finished in the top-5 of the MBC averaging 7.3 RPG. Evan Demoray amassed 17 total blocks on the season, which ranked third in the league. Woodall was known for snatching 2.7 steals per game.

The team opened the 2019-2020 campaign, with a nice road win over Division II power Waynesville. On December 3, the first home basketball games were played in the schools newly constructed Warrior Center. It was a night of celebration, as Honaker Court hosted the first girls/boys varsity basketball doubleheader in front of a capacity crowd. Over the next two weeks of the season, the Warriors hosted four consecutive home contests, and posted a nice come from behind win over Emmanuel Christian. The inaugural Athletic Hall of Fame class was inducted days before Christmas, which included two prominent alumni basketball players (Romain Sato & Aaron Deister).

The second half of the season featured a non-conference game vs. Franklin at the infamous Hoosier Gym in Knightstown, Indiana. The Warriors hosted a special Military Appreciation Night in January, honored its four seniors (Griswold, Welker, Thompson, & Shick) on senior night in February, and also recognized its youth basketball teams, players, and coaches. Jake Deason propelled the Warriors to a non-conference road victory over Seven Hills, coming off the bench to score 20 points. The regular season ended with a home conference game against rival Middletown Christian. In the 4th quarter, Deason again caught fire from beyond the arc and Luke Thompson hit some clutch free throws late to help the Warriors secure the victory.

The Warriors were seeded #15 going into the OHSAA sectional tournament and posted a thrilling first-round upset victory over #5 ranked Greeneview! In the second round, the Warriors couldn’t match the red hot shooting exhibited by #8 seed Preble Shawnee, which put an end to the season. 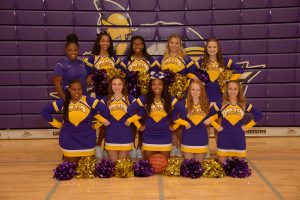 We would like to express a BIG thank you to our cheerleaders, for their support, spirit, and promotion of special theme nights throughout the season. The Warriors are already planning for the ‘20-‘21 season and are excited to have the Warrior Center available for camps, off-season training, and skill development. Mark your calendar now for the 2020-2021 season opener set for Friday, November 27 in the Warrior Center!