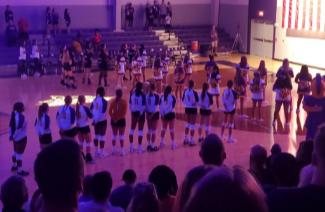 The Lady Warriors opened the 2019 regular season with a straight-set victory over Northridge in front of a capacity crowd in the school’s newly opened Warrior Center.

DC overcame an early five-point deficit to win the first set 25-15. That momentum would continue directly into the second where the Warriors raced out to a 14-1 lead and only relinquished six more points before ultimately taking the set, 25-7.

The final frame began much more evenly as the teams exchanged leads three times before Dayton Christian pulled ahead to win the set and match, 25-17.

The Lady Warriors will resume play on Monday, August 19 at Franklin High School at 7:00 pm.